Prevent Water Damage to Your Chimney 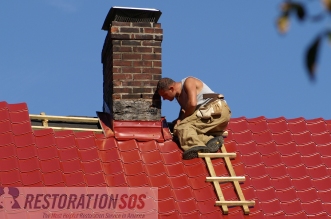 It is a small wonder that more chimneys are not damaged or otherwise compromised by water damage. The brick and mortar making up the construction of your chimney are the only such parts of your home that are not at least partially protected by a roof and eaves. The chimney rises above your roof and is constantly exposed to wind, rain, snow, and ice, not to mention brutal freeze/thaw cycles.

Chimney Construction and What Gets Damaged

The typical chimney is constructed out of brick, mortar, steel, and cast iron, all of which may deteriorate as the result of prolonged contact with water. These materials will also break down as a result of freezing and thawing causing moisture to penetrate the material and expand, causing stress. Water will also steel and iron parts.

Chimney water damage may be preventable if you make the right choices early on. Chimney caps or rain covers are the least expensive method, designed to keep water out of the flue openings as well as preventing access to the chimney by birds or other small animals. These caps also prevent sparks from leaping out of the chimney and landing on the roof or dry ground where they may quickly turn into a blaze.

Many times, the flashing (the seal between the roofing and the chimney) surrounding the chimney will need to be replaced, since flashing prevents rain water from running down the chimney into living spaces where it may damage ceilings or walls. Damaged flashing may also allow water access to rafters, joists, or other structural elements where rot may occur.

How to Waterproof Your Chimney

Chimney waterproofing is another method by which chimney water damage may be avoided. Masonry materials are quite porous as a rule and will absorb large amounts of water, while brick can almost be used as a sponge in many cases. More recent products such as high quality mortar mixes are vapor permeable, meaning that they will release moisture but not allow moisture in. Any water that has originated from the inside will be allowed to escape, without causing additional problems for the chimney structure. Paint should never be used as a waterproofing agent since it is notorious for trapping water inside, accelerating the deterioration.

Any water damage to chimneys is usually a prolonged process, occurring over a period of time and may not be evident until serious damage has already occurred.

Some chimney water prevention measures may cost a bit, but these costs are small compared to what would be spent to repair or replace a chimney damaged by water. Take the time now to have your chimney inspected and guard against water damage.

Recommended Reading:
Prevent Water Damage in the Attic
Preparing Your Roofs and Gutters for Winter

Learn More about Preventing Chimney Water Damage in this Video: