For about 250,000 households every year, frozen pipes are not just a mere nuisance. In fact, water damage accounts for one-fifth of insurance claims yearly. Homes are damaged and lives interrupted every winter as water escapes into the home due to a frozen pipe that has burst. A pipe crack that is just an eighth of an inch can send out more than 200 gallons of water daily so you can image how serious the damage could be to a building's structure and contents, especially if you are away on a vacation.

Why Does Frozen Water Cause a Pipe to Burst? 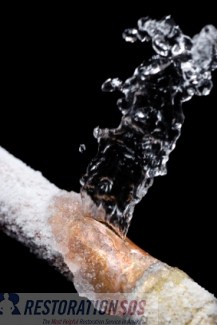 During the cold months when the temperature in your house drops below 32 degrees, there is a natural likelihood for the water supply pipes and drain traps to become frozen. Water, when it freezes, expands and this causes the pipe to burst because it does not have the space to contain the expansion. So, when winter is over and the ice starts to thaw, the water leaks out of the areas where the pipe burst which could be anywhere in the water supply system. Repairing a burst pipe will cost money - there is no question about that. But water damage resulting from uncontrolled leaks can easily cost thousands of dollars.

Which Pipes Are Likely to Freeze?

Some pipes and piping sections are likelier to freeze than other parts of your water supply system. Pipes running through the exterior walls of your house are more prone to freezing as well as other pipes that received the most exposure to the cold such as those running through the attic crawlspace, unheated basement and garage. You should also check the main pipe that is supplying water to your home because it is particularly at risk of freezing and bursting.

What to Do When Frozen Pipes Burst

First, turn off the main water supply. If you are not able to this, call a plumber right away. Then, contact your insurance company if the burst pipe has caused water damage to your home. Normally, coverage for this type of damage resulting from burst pipes is offered by standard homeowners insurance. If repairs are necessary, make sure to speak to your insurer about it first because the specifics of the coverage may vary.

Now, if water is seeping out of the walls or the ceiling, shut down your power supply at the meter box. Then, call a professional electrician at once. Open the doors and windows in the water-damaged room to allow it to dry. Make sure to protect your documents and possessions by keeping them in a safe location.

Unless you're a very skilled do-it-yourself kind of person, it is best to leave a burst pipe problem for a professional plumber to fix. Otherwise, you could cause further water damage to your home that can lead to thousands of dollars worth of repair and restoration. So, it is strongly recommended to let a professional fix or replace a burst pipe.

Recommended Reading
Knowing What to do When a Pipe Bursts
Preparing Your Home for Winter: Plumbing and Pipes