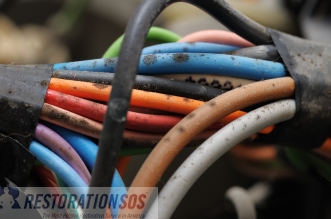 In any case of water damage to a home or business, there is the question of whether or not the electrical system has been compromised. Water and electricity are a dangerous, perhaps lethal combination, and poking around in the wrong place or flipping the wrong switch could have dire results.

Where to Start with Electrical Water Damage

Any wires or cables exposed to flood water need to be replaced in order to make sure the electrical system continues to function normally. Any time that wiring is exposed to water or even excessive moisture, the internal components may be damage due to corrosion or buildup of mold. Damage of this type may result in insulation not doing its job or termination failures that may prove problematic. The problem only gets worse if the wiring was exposed to salt water corrosion, such as that which tends to occur during damage from hurricanes or tropical storms. Some inland flooding may also cause problems with water that has been contaminated with fertilizers, chemicals, or oils.

Some wire and cable are specified for dry locations only and as such should be replaced if exposed to water on any level. NM-B cable, one of the most common types of dry condition cable, contains paper fillers that may serve as conduits to pull water into the cable assembly, causing premature cable failure.

Cables that are properly specified for humid or wet locations may be used again as long as no contaminants are discovered in the cable itself, although some problems may not show up until much later due to corrosion of the conducting materials. If the ends of a conductor have been exposed to water, then the cable should be purged and an insulation resistance test conducted before any re-energizing attempt is made.

Any and all wiring or cable products that have been exposed to or submerged in contaminated floodwater should be examined by a qualified electrical contractor in order to determine if the cable is safe for continued use. Not all cables will fail immediately when energized; in some cases it may take months for the cable assembly to fail. In any case, electrical contractors are the best source for making the proper determination on what may and may not be used.

The same goes for electrical appliances or components, any one of which should be deactivated and unplugged in the event of water damage. They should not be turned back on until a thorough examination has been performed. Components deemed irreparable should be destroyed before being disposed of in order to prevent others from inadvertently activating them.