10 Most Nasty Flooded Basement Disasters In 2023

Basement flooding can do serious damage to a home - not just from the destruction of property and possessions, but also because it can create the perfect environment for all kinds of nasty creatures - from mold and fungus to insects and other creepy-crawlies.

If your basement has ever flooded in the past, you can probably commiserate. Cleaning up is no joke, and it goes beyond simple water removal to often needing more extensive cleaning, disinfecting, restoration and even renovation services.

If you were lucky, you only experienced minor damage and minimal cleanup work, unlike the victims of the following basement flooding and mold horror stories.

These Are The Grossest Basement Flooding Stories You'll Ever Hear (& See)

We've collected some of the worst horror stories and images from around the web caused by flooded basements, growth of mold, and more.

1. Swimming Pool's Worth of Poo Water

Nothing like coming home to a swimming pool's worth of water and poo in your basement, which is exactly what homeowners in Widefield, CO came home to after a sewer pipe in their neighborhood backed up. Even after water removal was complete, a nasty sludge of raw sewage and feces coated most surfaces. Homeowners couldn't even turn on the air conditioning, because of the possibility of blood born pathogens and bacteria from the feces.

If there's anything worse than an overflowing toilet, it's an overflowing toilet that floods your basement during your kid's birthday party...that you then have to clean up. We'll let the victim tell the story herself - though we've taken the liberty of bleeping out the expletives:

"There were about 20 people at the house when my friend comes running up from the basement telling me my toilet was over flowing. I was mortified. I almost threw up right there. I went downstairs to survey the damage, that's when I actually did throw up. I cleaned raw sewage all day. Took me about 8 hours, solo, to get everything clean again. I threw away 2 brand new shop vacs and everything I was wearing. I couldn't take a shower, so I scrubbed myself stupid naked in my back yard at night with a garden hose. It was one of the worst days of my life. Somehow during the cleaning, I had gotten crap in my *bleeping* ear. It was in my hair. *BLEEP!* I need a shower now."

When an elderly woman fell ill and was hospitalized, her family wanted her home assessed, as it seemed that even if she recovered, she would no longer be able to live alone. They called a local contractor to assess the condition of the home.

The result? The woman's attic was completely filled with mold, by a leak in her basement! For years, a chronic leak in her basement had caused moisture in the basement walls. Mold took root and began creeping up the walls of house, until it was able to take over even the attic! Doctors at the hospital discovered her illness was from years of breathing in the mold that had invaded her home without her knowledge - it took her 8 months to fully recover.

Apparently, it's all the rage to have a lake in your basement in Kentucky. Throw in some leeches, some carp, and a few poisonous snakes, and you can technically have your own filthy, disgusting swamp!

These cute little fellas moved in after a basement in Long Island flooded and was never properly dried. They just love damp, dark places with piles of clutter all around. Though they look like something out of an alien invasion movie, the good news is they're fairly harmless to you and your pets, even if they are terrifyingly disgusting.

Not much needs to be said on this image - except that the photographer claims that's a pool of water in the basement of a building. Looks like a pool of something alright, just not water...we keep expecting the creature from the black lagoon to pop out and say "boo."

7. The Mold That Wouldn't Let Go 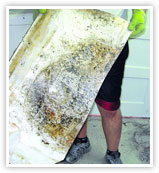 While this may not be the grossest basement ever, the real horror lies in what the cleanup and water removal uncovered. After heavy rains flooded a basement in Minnesota with 2 inches of water, the homeowners did everything right. They removed the water with the help of family, friends, and a strong Shop Vac, had dehumidifiers and fans running to dry things up, and even hired an abatement company to ensure mold didn't invade the home. Sounds like a happy ending right? Wrong. One of the owners began getting headaches after spending time in the basement. Closer inspection revealed mold growing up the drywall - to the point where you could literally poke a finger through the wall! Shoddy and corner-cutting renovations by earlier owners left overloaded circuit boxes, wall studs that didn't reach the ceiling, and 2x1s where 2x4s should have been used, among other things.

In a way, the flooded basement was a blessing in disguise, leading the homeowners to discover serious issues with their basement that posed major health and safety risks. Lots of renovations and $45,000 later, the Rickgarns were finally mold-free.

Ok, to be fair, they're not the actual fingers off of a corpse, but a type of fungus/mushroom. Either way, having them in your basement is creepy and disgusting. Of course, a dirt-floor cellar with water seepage in a house built in the 1830s is bound to have some "unique" growths.

Not quite sure of the story behind this one - but we sincerely doubt the brown tint to the water comes from mud. We're guessing a fragrant mix of raw sewage, feces, and dirt gives it that muddy water shade.

10. What Beautiful Wallpap-OMG, That's NOT WALLPAPER!

Ok, while technically this is someone's first floor, it's horrifying enough that it had to make the list. Besides, if the upstairs looks like this, we can only imagine how disgusting the basement is...after all, the water started down there!

What To Do If Your Basement Flooded

Water removal is the most important step of cleaning up after a basement flood. If you've experienced a serious flood, you'll need to determine (and repair) the cause of the flood, remove all water, and allow your basement to dry out. From there, it's important to make sure no mold or fungus has taken root - and if it has, you'll need to get it looked at ASAP.

If you have flood insurance, it may alleviate most of your cost, depending on your coverage and the reason for the basement flood. If you're in an area with heavy rain or prone to frequent flooding, you also want to make sure you have sump pumps installed to help prevent flooding in the first place.